In 2003, the Port of Buffalo Niagara was the ninth largest port in the U.S. with total trade flows of $59 billion.  However, after consolidating statistics of ports that serve the same region, the Buffalo Niagara region jumps to the sixth largest trading region in the U.S. after Los Angeles (with three ports), New York City (with two ports), Detroit, Laredo, and Port Huron (each with one port).

Among land ports, the Port of Buffalo Niagara ranked fourth behind the Port of Detroit, Laredo, and Port Huron.

In terms of 2002 U.S. trade with its North American Free Trade Agreement (NAFTA) partners, the Port of Buffalo Niagara ranked as the third largest port with total trade flows equal to $54.9 billion.  Trade with Canada accounted for 99 percent of this total.

Canada exports $21.4 billion by truck into the United States with an additional $7.13 billion by rail.  Twenty-six percent of all exports are destined for JFK and EWR airports for final transport by air.

The manufacturing sector is a key part of Buffalo Niagara regional economy.  As of 2003, the Buffalo Niagara region had 2,000 firms active in the manufacturing sector (accounting for 5.4 percent of all companies in the region), which employ 94,000 people (accounting for 14.1 percent of all jobs in the region).

Several strong industry clusters have emerged from the manufacturing sector:

Food and Food-Related Products: The Buffalo-Niagara region has a higher concentration of employment in the food processing industry than the national average, with approximately 300 firms providing approximately 12,000 jobs.  This accounts for 17% of all food processing jobs in New York State.  The majority of these jobs are in the food manufacturing sector.  The region also has the highest concentration of food machinery manufacturers in the state, as well as high concentrations of dairy farms and food processors.

Air cargo is a natural fit for the Niagara Falls International Airport.  With the increase costs of fuel, landing fees, and infrastructure expenses in the major urban centers, operating out of the NFIA makes sense.

Buffalo Niagara is a region comprising eight counties of western New York State, on the border of the Niagara Peninsula of Ontario, Canada.  The region is served by four international bridges connecting the U.S. and Canada and two train crossings.  The Niagara Falls International Airport is centrally located for distribution to and from major population centers, easily reached from the U.S. highway system. 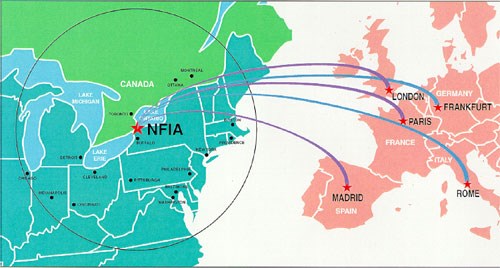